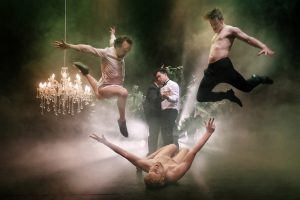 KING is a largescale dance-theatre work featuring nine dancers plus a live, on-stage singer. It is an interrogation of masculinity, homosexuality and homophobia and the innate power dynamics that exist within patriarchal structures. Created by Shaun Parker and composer Ivo Dimchev (who performs in the show), KINGwas set for a world-tour in 2020 before the Covid-19 pandemic closed the borders. The show will now re-premiere with a six show season at the Seymour Centre as part of Sydney WorldPride in February 2023, before heading to Europe for an extensive tour in June/July next year.

28 February – 4 March: KING season at The Everest Theatre including a VIP post-show event on the 28th.

For queries and to submit an application please email CV and covering letter to:

We will be looking for a Stage Manager to tour with the show to Europe in due course, and dependent on the outcome of the Sydney WorldPride season will offer it first to the successful candidate of this advertised position.