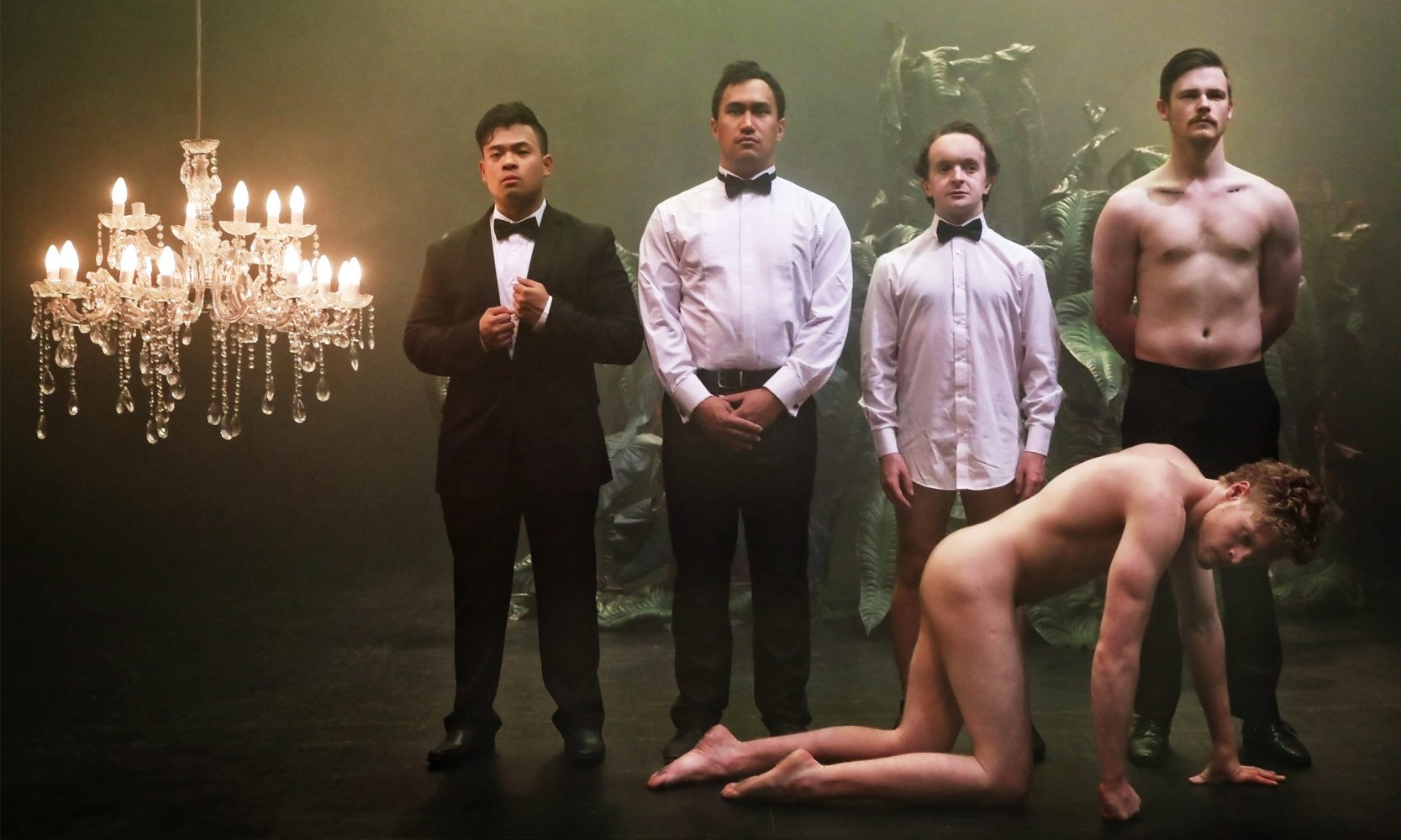 Set in a fantastical realm that is part elite cocktail-bar, and part jungle, KING interrogates the power systems that oppress and hinder the natural development of male sexuality and identity in the form of a biting, yet humorous theatrical experience.   Parker’s highly physical and articulate choreographic world in KING intertwines with the scorching live sung narration of Dimchev’s deconstructed operatic and cabaret-esque vocals. The key protagonist and archetype in KING is observed as a naked man, and we witness the male body as a commodity for anthropological observation. The juxtaposition of Dimchev’s gloriously sung counter-tenor against the male dominated world created in KING, provides a compelling counterpoint to the notion of the power and brutality found within the context of historic masculinity and socio-sexual-political structures.

As leading arts critic cis-female Maghie Ghali, from the Daily Star in Beirut commented “KING is a stunning canon!  Homophobia is interrogated…and the cast reflects Australia’s multicultural heritage, and the dancers are of diverse body types and ethnicities!”

KING is a ‘must-see’ production, and Sydney WorldPride audiences will have the opportunity to witness the relaunch of KING before it heads overseas to festivals across Europe.  Running alongside the season is an integrated Queer Mentorship program for emerging artists and producers led by Shaun Parker, developing our next generation of LGBTQIA+ artistic leaders.

With the generous support of the Australia Council for the Arts, the New South Wales Government, Create NSW, City of Sydney and Inner West Council. Thank you also to Seymour Centre and Sydney WorldPride Arts.

“If you want to be blown away by a choreographic language as gutsy and heart wrenching as Shakespeare’s poetry, don’t miss KING by Shaun Parker and Company.”

“The mind boggles at the depth of thought and intellectual process that underlies Shaun Parker’s complex choreography.. this is a dense and richly layered work that keeps you on the edge of your seat to the very end.”

“It is a timely and original interrogation… Introducing queer perspectives to the cis/het crisis of masculinity, KING entangles itself with the cultural and primal forces that shape and deform identity… the audience burst into furious applause. The darkness lingered. The audience insistently clapped.”

“In the current environment of changing patriarchal structures, KING is a must see.”

“A stunning cannon…the cast reflects Australia’s multicultural heritage and the dancers are of diverse body types and ethnicities. The choreography is brilliant!”

“Weaving in and out of the jungle and layers of masculinity, love and control, the dancers’ strong and vulnerable movements, alongside Dimchev’s thoughtful composition, created a performance that beautifully portrayed anxiety and longing, often subsumed under normative masculinity and its focus on desire.”

“… a milestone in more than one way, leaving an impact on everyone who has seen it.”

“KING is built on a remarkable dance/music collaboration and a highly theatrical, inventive and expressive choreographic approach.”